Hello everyone, hope you’ve missed me a little bit 😉 .  I wasn’t entirely lazy in the kitchen these past few weeks, our family still cooks and eats together on Sundays, but those occasions don’t lend themselves to food picture-taking, hence no posts.

I have been cultivating a sourdough starter again, this time starting out with one set of instructions that didn’t turn out the wanted results – despite sticking to the instructions, my starter turned out way too liquid – so I looked elsewhere on how to save the starter.

When I found two other sets of instructions, I decided to combine those and kind of went rogue, not sticking to the classic rules of cultivating a starter.

The original starter recipe used rye flour to begin with and then called for bread flour for feeding. This produced the liquid starter that doesn’t seem to be ready to use to this day although I started it three weeks ago. It always rises but the floating test is never successful. Even reducing the amount of water when feeding did nothing to make it less liquid.

From this unsuccessful starter I took a certain amount to start a second jar, feeding with spelt flour and using less water. This one worked really well, seemed to mature within a week, and yesterday passed the floating test.

I’m not giving up on the original one yet, but if it doesn’t float for another week, I’ll just discard it and keep on maintaining the spelt one. 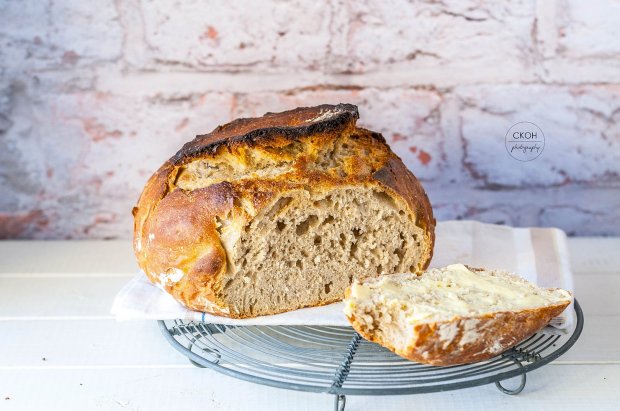 So which recipe to go with for the successful spelt starter? The last sourdough bread I made was overly compIicated to me, so I was looking for something more manageable, especially for a weekday. Then I remembered seeing this post on No-Knead Overnight Sourdough Bread by Lucy from Supergolden Bakes, and I’m very happy I went with that one.

If, like me, you already have a starter ready to go, this is such a simple, no-fuss recipe. I mixed the dough around 6 pm and when after about 1 hour the dough had risen, transferred it into its overnight container, and this morning I got so much pleasure out of seeing how the dough had risen and was ready for the next step. When I say next step, it’s really just putting the dough onto a work surface, folding it, forming it into a boule and placing it into a proofing basket – a 10 minute max task. Another 30 minutes for the last proofing while the oven and the pot are heating up, and voilà. Ready for baking.

This will definitely be my go-to recipe from now on. The only thing I wasn’t really good at was the cutting before baking but I’ve ordered a lame/bread knife to do that, so the next loaf should be prettier…

If you, too, feel slightly intimidated by all the sourdough bread recipes and their elaborateness out there, do try Lucy’s recipe – it’s really rewarding and works first time round!