Last Saturday at the supermarket I happened upon some butternut squash and bought it on a whim, like I’m prone to do with food items. On the way home I thought about making quinoa & butternut squash burgers and about what I could have as a side.

Incidentally I’d just seen a Williams Sonoma recipe for hasselback potatoes, which they cooked with thyme. So I stopped by the garden center, and they only had lemon thyme left, which smelled too strong for me. I chose oregano instead, the lovely sales lady ran off and came back with a beautiful big oregano plant that she’d just seen on walking over. I hope I can make that thing survive. In the end I decided not to use the oregano with the potatoes because I thought it would burn in the oven, so I used it in the burgers.

Initially I thought I’d add feta cheese to the quinoa & butternut, as well as an egg for binding. I decided against the cheese because I wanted the butternut to be the dominant ingredient, and the egg wasn’t necessary at all, which surprised me. I stirred the roasted butternut into the quinoa with a fork, and it all became a mushy mass that stuck together all by itself.

My seasoning was conservative, I cooked the quinoa with ½ a vegetable stock cube, added the pumpkin and then just a few turns of sea salt and pepper as well as a pinch of cayenne, and the very finely chopped oregano. I couldn’t really taste the cayenne, there was no heat in the burgers but it turned out that was OK because I could clearly taste the pumpkin, which had been my goal.

While frying the burgers, I realised I hadn’t thought of a sauce to go with them and the potatoes, so after the burgers were done I just poured some cream into the pan and let it reduce until it had the desired consistency. Instead of a creamy sauce salad would be a healthy option to go with this meal, but there wasn’t a single salad ingredient to be found in my fridge…

I am so pleased with how my burgers turned out! They were really quick and easy to make, and the taste was very rewarding. Since I hadn’t overdone the seasoning, the butternut was clearly discernible, and I’d never made hasselback potatoes before so I was happy they turned out so well, too. This is definitely something I would make for guests.

Brush the butternut slices with olive oil on both sides and place on a baking sheet. Bake for 20-30 minutes at 200°C / 400°F on middle shelf.

Cook the quinoa with the stock cube in 500 ml / 2 cups of water while the butternut is in the oven. Both should be done around the same time. Leave both to cool while the potatoes bake.

For the hasselback potatoes, cut thin slices without slicing all the way through. Melt some butter and pour some of it into an oven-suitable pan. Place the potatoes in the pan, season with a few turns of salt, and pour over more butter so that all the potatoes look a bit shiny [I found it’s best to pour a little of the butter between the slices and distribute it with a brush.]

While the potatoes are in the oven, cut each squash slice into 4 pieces, then incorporate each into the quinoa using a fork. The result should be quite mushy. Season the quinoa & butternut mixture with about 3 turns each of salt and pepper, and a pinch of cayenne. Add the chopped orgeano [I used a mini blender to chop it very finelyI], mix well and form burgers.

When the potatoes have about 15 minutes cooking time left, fry the burgers in a buttered pan until they are crisp and slightly browned. Take the burgers out of the pan, add cream to the pan and reduce until desired consistency is reached. 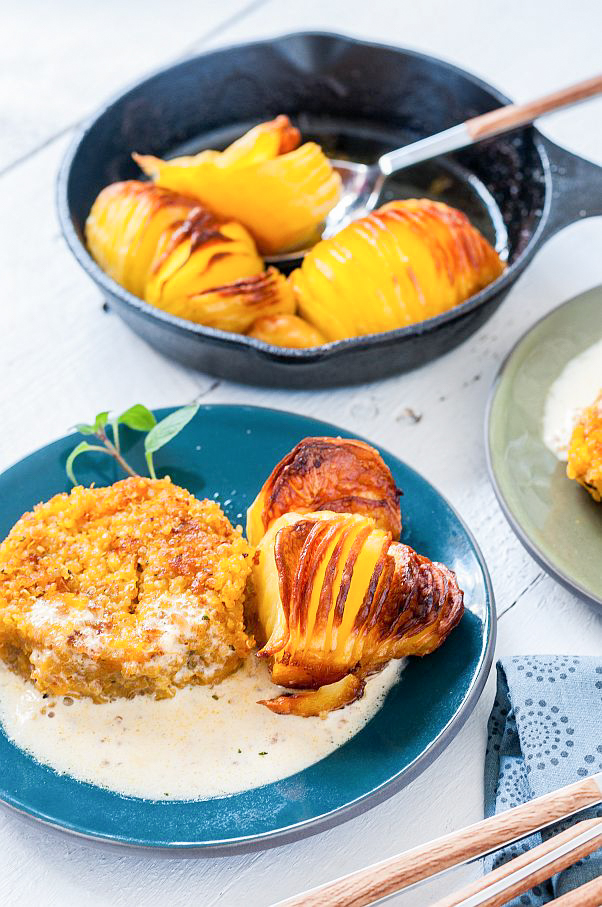